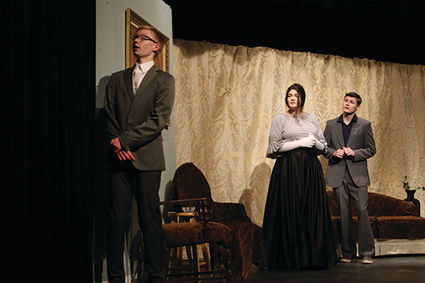 GETTING THE GOSSIP: Algernon (Levi Whitehurst) listens in on Jack (Wyatt Biggers) and Gwendolyn's (Emily Smith) discussion of marriage during dress rehearsal of The Importance of Being Earnest. The play will be streamed by the Whitehall Low Power TV and online April 8-9, 2021.

The cast of Whitehall High School's production of the Importance of Being Earnest is wrapping up dress rehearsals and is excited to present their production to the community, via streaming, on April 8th and 9th.

"This play is a classic show, well-known in the theater world. I presented two shows to the kids at tryouts & they read parts for each show. After, the group voted to do The Importance of Being Earnest," said Whitehall Drama Coach Marci Whitehurst. She noted that, since the show is public domain, it also gave them flexibility to televise and stream the production, due to COVID-1...