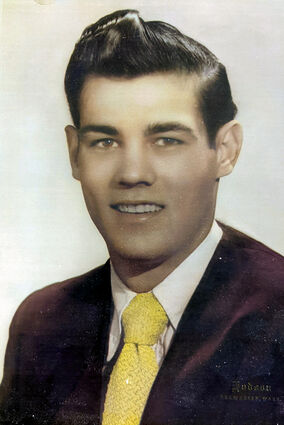 Gay Warmoth passed away on August 4, 2021 at Community Medical center. Born in Missoula on October 27, 1930 to Nellie and Noel Warmoth, being the third of their six children. Gay lived on 153 Livingston Avenue, a house that still stands today. He attended Paxson Grade school until the family moved to the Puget Sound area. Gay lived and went to school in Shelton, Washington while living with his brother Frank and longtime friend of his father, Harry Bantham. Gay returned to Bremerton to finish his senior year in high school.

Gay served in the military for a total of 29 years. He was a First Sergeant in the US Army and Army Reserve, then transferred to the Navy where he became a Senior Chief officer. He was proud of his service in the Korean War (March 1953 through May 1954) assigned to the E company Wolfhound regiment of the 25th Infantry Division. People frequently asked him how a Navy Senior Chief earned a Combat Infantry badge. He was proud to tell them he earned it as a US soldier in Korea.

Gay was serving as best man in his brother Frank's wedding where he met Elsie Jean Parker. Soon he was traveling between Camp Hanford to Missoula to see Elsie as much as he could. Gay and Elsie married on January 22, 1955 and were together until her passing in 2014.

Gay began his career with Mountain Bell in Missoula and was a Central Office equipment installer. Many of the 32 years with Ma Bell were spent traveling throughout the state and Idaho. His retirement party had the title of the end of the "Warmoth road show". Gay was a dedicated and hardworking employee. After retiring, he went to work for Beach transportation. In addition to driving school bus routes, he also transported firefighters and flew to North Carolina to drive new school buses back to Missoula.

Gay had many passions and hobbies. He volunteered for Little League for the better part of 5 decades. He received a few prestigious awards during this time including the 1993 Renny Malach award, the 2001 Volunteer of the Year, and the Ray Rocene Sportsman of the Year award in 2006 for his volunteer efforts in Missoula. Gay also has a field named after him at the Westside Little League fields. He and Elsie also sponsored various teams for out of state tournaments and offered housing.

He was also a member of the Western Montana Retriever Club. Gay and Elsie always had dogs and they became part of the family. Gay raised, bred, and ran his dogs in retriever trials and trained several state champions and numerous other awards. Many weekends were spent going to field trials and spending time with the many friends they made through the club.

Gay always enjoyed and looked forward to his annual bird hunting trips to Fort Benton with family and friends as well as the fishing trips with his Uncle Don.

One of his favorite pastimes was working in his shop. Gay had a very creative mind and spent hours making baskets and coasters out of wire, soda bottles that turned into painted fish, wood tulips and wind chimes made from pipes.

Gay had many accomplishments but the greatest for him was that of being a father, grandfather, caring uncle and cousin. Keeping family members connected was extremely important to him. He very much wanted to keep his family legacy alive by ensuring all relatives knew their family ancestry. Gay was an amazing storyteller and loved passing along his tales to all.

Gay spent a great deal of time in Whitehall where his mother's family had mining claims. He loved traveling to the cabin with his nephew Steve and relishing the Pruett/Warmoth family history.

Gay was an incredibly generous and giving man. He gave of his time, money and would give you the shirt off his back if asked.

He will be greatly missed by all the relatives he leaves behind. He is survived by his daughter Kathy, son Larry (Debbie), granddaughter Taylor (Daniel), grandson Travis (Emily) and grandson Tanner, sisters Mickey, Pudge and sister-in-law Shirley. He also had many cousins, nieces and nephews that dearly loved their Uncle Gay.

There will not be any services at this time, but Gay will be buried in Whitehall next to Elsie, his mom and dad, brothers and many other family members. Ashes will be spread at his favorite places.