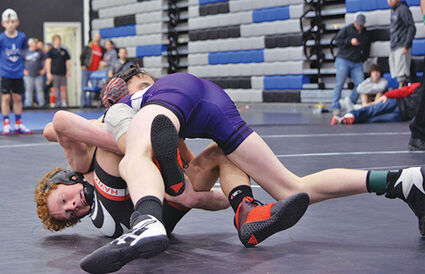 TAKING HIM TO THE MAT: Isaac Skogen, a sophomore at Whitehall High School, secured 7th place in his bracket this past weekend at the LeProwse Invitational Tournament in Bozeman.

Whitehall wrestlers traveled to Bozeman over the weekend to compete in the Tom LeProwse Invitational Tournament. This was held at the new Gallatin High School and consisted of many of the best wrestlers from Montana as well as several schools in Wyoming

After two days of wrestling Whitehall was able to place four wrestlers. Juniors Leo Scafani and Miles Hoerauf both placed third in their respective 32-man brackets.

Scafani started with a pin over his Billings Central opponent, followed by another pin over Helena Capital. He lost his semifinal match to Worland, WY. He finished with a win o...