Trojans Place Fifth as Team at Divisionals, Will Take Six Wrestlers to State 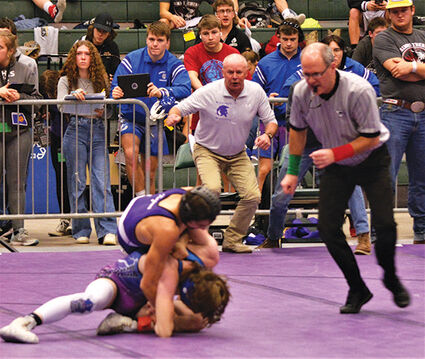 ATTENTIVE COACHING: Whitehall Trojan Wrestling Coach Mark Nelson is always an active coach during his wrestlers' matches. Here he nearly jumps onto the mat while Cody Fuller takes on his opponent.

The Whitehall Trojan Wrestling team traveled to the Butte Civic Center February 4-5 for the Class B/C Western Divisionals. This tournament consisted of the 24 class B and C wrestling teams in the western half of the state. With 223 wrestlers competing, this was the largest class B/C tournament in the state this year.

Whitehall entered 12 wrestlers and placed 5th as a team. The final results had Boulder at first place with 204 points, Cut Bank (199), Eureka (123), Superior ( 122), and Whitehall (117). Six of the Whitehall wrestlers placed and qualified for the state tournament in Billings...