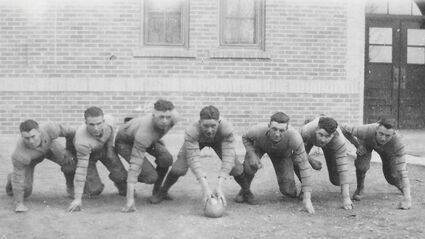 In February 1896, New York City was experiencing "the coldest recorded here since the establishment of the Weather Bureau." The East Coast was reporting temperatures as low as -48. Here in Whitehall, people were taking another winter in stride. Montana Governor Rickards and other members of the state capitol commission were in Olympia, Washington to gather information before erecting a new capital complex for our state. The following news items are taken as written from the Whitehall Zephyr, February 21 and 28, 1896 editions.

WATERLOO: Monday evening, Feb. 24, a concert – vocal and instrumental – will be given in the A.O.U.W. hall by Miss Bessie Black of Whitehall, assisted by Miss Mamie Morris at the piano, the Whitehall Ladies Quartet (Mrs. D. McCall, Misses Black, McCall, and Houghton) and Messrs. T.T. Black and Joe Noble. Admission 50c for adults and 25c for children. The Zephyr can assure its readers in Waterloo that they will be given a musical treat that those who miss it will be the losers.

SILVER STAR: Johnnie Wiant and Bud Smith had a fight Tuesday-yes, sir; but they kissed and made up again. Jap Jordan was seen in the Star Tuesday, taking up a subscription for the poor, and trying to organize a Sunday school in this wicked man's town. I am afraid he has come to a field where the grass is short. Wes Potter is hauling ore from the Clipper mine to Whitehall for Pascoe Brothers. Several of the leasers are ready to make shipments. Two of the leasers-Jack Beckerty and Frank Cox-have been celebrating Chinese New Year for two or three days.

Washington's Birthday, Friday evening, February 21st, the members of the Whitehall Cornet Band will give another social dance in their hall. The best of music will be in attendance, and every pain taken to make this the most enjoyable affair of the season.

ZEPHYRETTES: The spirited delivery team belonging to the W.B. Gaffney Co. took quite a spin about the streets Monday afternoon and led Luke, the spiritual driver, an animated chase about town. When they had got enough of it the runaways stopped of their own accord without having inflicted any damage. The cannon-ball express caboose jumped the track while coming down from Pony last Monday. It was first reported that the entire train was derailed; it took until late at night to replace the car on the track.

PERSONAL CHAT: Concerning People Here and There Whom We All Know or Ought to. J.R. Cochran, chief of police at Silver Star, was in town yesterday. Dr. Sam Wade is suffering from a wrenched back; hope it won't last long, Sam. The doctor has closed out all of his interests at Boulder and will now devote all of his time to his Whitehall business. Miles Tuttle, who has been suffering for weeks with a broken leg, was in town recently. Miles is evidently an optimist, for upon being commiserated regarding his hard luck, he replied that "it might have been worse." Billy Fergus has our sincere and heartfelt sympathy; he's over a thousand miles from home, back in the cold-blooded east where people are freezing to death while people out here have been sitting around in the shirtsleeves fanning themselves while they read accounts of it.

JEFFERSON VALLEY NEWS, February 1922. The following stories are based on notes made by Roy Milligan, Sr. from the February 16, 23, and March 2, 1922 editions. The photo with this article shows members of the WHS football team posing in front of the high school.

With so many children of the age when it is time to remove their tonsils and adenoids, a special clinic is being set up at the Whitehall Hotel to accommodate the number needing this operation. The Montana TB Association is providing assistance with the program.

One of our local businesses is being foreclosed on by the First National Bank. The Yellowstone Trail Garage has been having financial problems due in no small part to excessive overhead, bad collections practices, and keeping their car prices low. Mr. Tait, of Tait's Garage, is a member of the bank board.

You might have heard a loud boom a few days ago. The substation at Piedmont sustained extensive damage when an explosion occurred, injuring Mr. E. S. Horton. He is recuperating at the hospital in Deer Lodge.

The Methodist Bible Class and young people's Sunday School students will be holding a fun and special event on February 22nd. The Necktie Festival will provide an opportunity for local gentlemen to join a local lady for lunch. Here is how it works. The Methodist ladies will each submit a necktie which will have their name attached to the back. The tie must be new and cost between 2 cents and a dollar. The gentlemen will each pay 25 cents for the privilege of selecting one of the ties. The name he finds on the back of the tie is the lady he will sit with during the Festival luncheon. Where else can a man have lunch and get a new necktie for 25 cents?

The Firemen's Masquerade Ball was marred by two unfortunate events. This nasty winter with minus 28-degree temperatures kept all but 60 couples home for the evening and the fire east of town was impossible for our local volunteers to fight. Roy Hansen and his family, who were living in the William Stith house about one mile east of town, lost everything in the fire.

Miles Tuttle, who has been here long enough to know, says this is the worst winter in 55 years. Back in 1892, temperatures reached 51 below but it did not last as long as we are shivering through this winter. The snow this winter is the worst since 1879 but at least it is not hanging around as long as back in 1891.