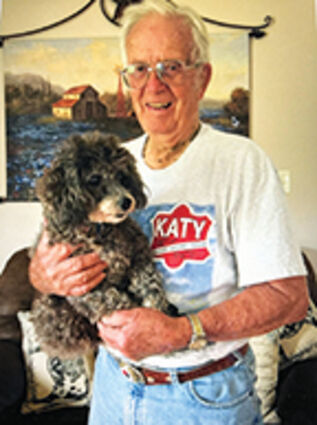 Dennis Ryan passed away at his home in Pattison, Texas on February 6, 2022, at the age of 101 1/2. His funeral will be held at St. Bartholomew's Catholic Church in Katy, Texas on March 4th or March 8th. Burial will be in Whitehall, Montana this summer.

He was born on September 30, 1920, in Bonesteel, South Dakota in the family home above the railroad depot where his father was the station agent. He began working as a relief telegrapher for his father in his mid-teens. After graduation, he followed his brother Henry and moved to Butte Montana about 1940. It was while attending Butte Business College that he met his future wife, Olive Marie Klockare of Whitehall. Shortly after, he went to work for the Butte Regional Office of the FBI. It was in 1943 that he joined the United States Marine Corps and while Home on leave, he and Olive were married on December 31, 1943, in St Patrick's Catholic Church in Butte, Montana.

Upon his honorable discharge in 1946, he followed his love of railroads and went to work for the Northern Pacific Railroad as a station agent at Skyline. There they lived in a rail car/apartment on the siding. There were no roads at that time so the only way in or out was to flag the train and ride the caboose down to Garrison Montana.

After daughter Denise was born in 1947, they moved to Sheridan Montana where he became the station agent. Son Joe joined the family in 1949 and in about 1954 the depot was

closed and they moved to Butte where he began working for Continental Oil company and later for Consolidated Freightways. Daughter Kay would join the family in 1957.

In about 1963 he began his long career in banking as a loan officer in Security Bank in Butte and in fall 1969 the family moved to Three Forks where he became bank president at the Security Bank of Three Forks until his retirement. They enjoyed square dancing, bowling, and their church family. He was a member of the Butte Elks Club for many years and many state banking organizations. In retirement, they enjoyed travels to Mexico, Ireland, England, and Sweden. During this time they spent nearly 18 winters in Surprise Arizona. They spent their time meeting some wonderful new

Dad loved making popcorn for movie night, watching spring training baseball games, and golfing. It was here that he scored his first and only "hole in one". Catholic faith and his family were always first in his life followed closely by his beloved Chicago Cubs and the US Marine Corps.

In lieu of flowers, the family asks that you remember Dennis and Olive in prayer. Donations can be made in his memory to a charity of choice or American Lung Association (lung.org), Toys for Tots (toysfortots.org), or the In-Memory Program American Parkinson's Disease (apdaparkinson.org).