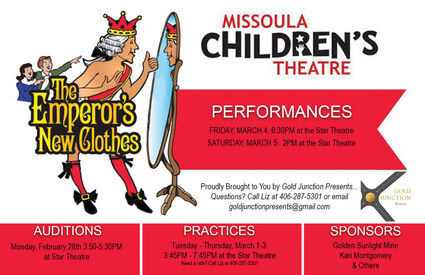 An audition will be held for the Missoula Children's Theatre's production of The Emperor's New Clothes Monday, February 28th from 3:50 PM to 5:30 PM at the Star Theatre. Those auditioning should arrive at The Star Theatre immediately after school and plan to stay for the full two hours. Some of the cast members will be asked to stay for a rehearsal immediately following the audition.

Among the roles to be cast are the Emperor; Many Penny and the Money Council; the Royal Scholars Roxy and Red; Kings, Queens; Gem and the Royal Jewelers; Boots and the Royal Cobblers; Lid and the Royal Hatters;...