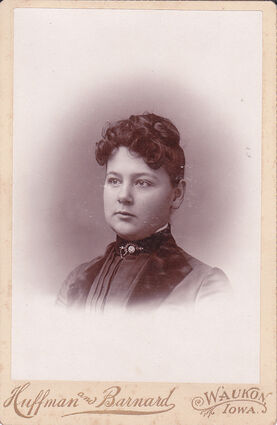 Louisa grew up in the best of families. She never knew the darker side of life, for as the only child (a daughter, no less), she had never wanted for anything.

Born Louisa Jane Flockheart she emerged into this life on a cold January morning in 1897, the child of arguably the richest couple in Waukon, Iowa. As first-generation Scots, Sir Robert Flockheart and his wife Dalriadan had fled Scotland on the heels of the religious persecution which had festered there for over three centuries.

Being of Irish blood, Sir Robert's wife had already tasted somewhat of the stigma that came from the spiritual descendants of Oliver Cromwell. Even though her husband was a titled landowner, a newly pregnant Dalriadan and her Lord sailed for the Port of New York. Two weeks later, after a bit of rough sailing, the Flockhearts were registered at Ellis Island.

Sir Robert Flockheart had been a land baron in Lanarkshire, in his native Scotland; when he and his pregnant wife came to American shores, it should be no surprise that he could not resist the magnetic pull of the richest deposits west of the Mississippi. It was in this world that Louisa Jane grew up, as the spoiled little rich girl who had everything brought to her on a silver platter.

Surrounded as she was by the imaginable opulence her parentage afforded, you can only imagine her surprise, much less that of her parents, when she ended up falling in love with the son of the Chinese ambassador. He had sailed into New York Harbor those 18 years previous, along with a young Scottish Lord and his pregnant wife, not knowing their paths would once again cross.

In this photo, Louisa Jane Flockheart is pictured wearing the broach her mother wore on that ocean journey.

If you would like to create fiction from history with one of the museum’s photos, please contact the Ledger at (406) 287-5301 or email whledger@gmail.com.