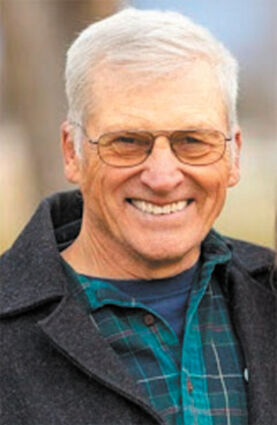 George John Hirschenberger, the greatest friend, husband, father, grandfather, and uncle passed away on Monday, April 25th. He was born in Chicago, Illinois on April 3rd, 1950 to George (Sr) Hirschenberger and Eileen (Byrne) Hirschenberger. He graduated from Gordon Tech High School and then escaped to UofM and Montana where he lived ever since.

George embraced every aspect of Montana that he could as soon as he got here. He bought a motorcycle, 2 horses, and an (ancient) flatbed pickup. He took horse packing classes from Smoke Elser and he and his friend escapee from the big city lived way up the Rattlesnake in a "cabin" (tool shed). He ate Sunday meals at the Palace Hotel and met his future wife, Nancy Jacobson, waitressing there.

During summers George worked for the Forest Service as a wilderness guard out of Wise River, and as a tree faller for Champion. He graduated in 1973 with a degree in forestry and range conservation and remained closely associated with the forestry school and the scholarship fund developing and sustaining deep friendships with many, many people. After graduation George and Nancy married and moved to a ranch up against the Bob Marshall outside of Choteau where he worked briefly before he signed on with the BLM, moving to Malta, MT. There, while he helped write the first EIS for the Missouri Breaks, George and Nancy welcomed two children into the world, Peter and Emily.

They then moved to the Butte area when the Butte BLM office was opened, living in Whitehall, MT, and gaining two more children, Morgan and Phillip, and another large group of close friends. The BLM "lent" George to The Nature Conservancy for several years, and he became active in promoting the Blackfoot Challenge, developing even more close friends.

When George returned to the BLM, he moved to the Missoula office where he stayed until his early retirement in 2007. After retirement, George went right back to doing what he loved, being a land steward and working with landowners to improve their lands. He was a board member of the Blackfoot Challenge, the Missoula weed board, Healthy Acres, the Forestry School Alumni Association, the Forestry school scholarship fund, and active in the building of a place for the forestry students to safely store their gear at the fort.

George was preceded in death by his parents, his sisters Mary Kay, Eileen, and Theresa, his son Peter and daughter Emily and his cousin/buddy, Rich.

He is survived by his wife, Nancy, two sons, and their families, Morgan (Rhianna), Henry and Heidi, and Phillip (Daridee) Taylor, Holland and Beau, his cousin Elaine, and many inlaws and nieces and nephews who loved and admired him. He is also survived by so many friends from every stage of his life. One thing George was good at was making friends and finding ways to help. He was always involved in finding solutions and offering his time and expertise to anyone who needed it. He was a lifelong learner and evolver. He treasured his roles as friend, father, Grandpa, and Oopa. His grandchildren were a special part of his life. He will be so greatly missed.

Donations in George's name can be made to any of the interests he supported, listed above, or the charity of choice. A celebration of life will be held on Monday, June 6, 2022, from 4 PM -9 PM at the Northern Rockies Heritage Hall. All who knew him as family and friends are welcome. George impacted far more people than just his direct family. For those of you who wish to share pictures, memories, etc. please send them to gjhberger@gmail.com. Let us know if we can share them as part of his celebration of life.