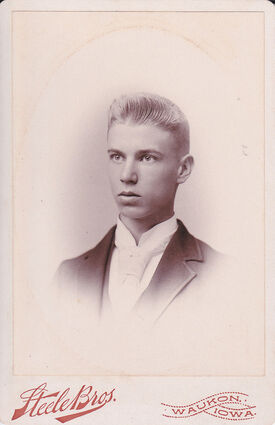 James Robert Bennet III was born into it, one might say! Making a grand entry into this world in late June of 1883, the 23rd, to be precise, Jim-Bob emerged into this life in the local physician's office in little Dorchester, an unincorporated town in Allamakee County, near the Minnesota border. Jim-Bob's parents, James II and Elisha Bennet were among about 50 other inhabitants of the small farming area.

James the Second was a pensioner from the Mine, drawing a decent $16 a month. Because of the nature of the injury for which he drew his pension, James had moved his small family from greater Waukon to the farming community of Dorchester to try his hand at truck farming. As Jim-Bob grew into his roots, so to speak, he soon became one of the biggest farmers in the area. The Bennet's farm supplied many of the local grocery stores in Allamakee County, as well as south-eastern Minnesota. They even expanded their territory into western Wisconsin before it was all said and done.

James Bennet I, Jim-Bob's grandfather, had fought in the Mexican-American War of 1846-48, while James the Second had actually seen some action in the Spanish-American War roughly a half-century later. Therefore, it didn't come as much of a surprise when their son and grandson decided to join forces with the troops, a couple of decades later, in the European Theatre.

Though his father and grandfather both made it out relatively unscathed, Jim-Bob never made it back home to Dorchester. As a result, Bennet Farms slowly dropped off the radar in Allamakee County, and James the Second, along with his wife and two daughters, moved back home to the family manse in jolly old England.

This photograph is of James the Third on his 27th birthday, just prior to his journey overseas.