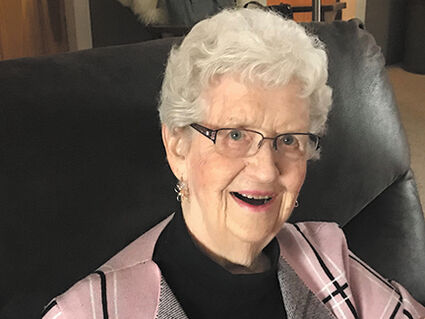 Frances Helen (Thompson) Duncan was born December 3, 1933, in Sheridan, Montana to Richard and Kathleen (Winslow) Thompson. The family, which included younger sister Patricia, lived in Virginia City but moved to Whitehall when Fran started grade school. She was a baton twirler all four years of high school, serving as head majorette from sophomore year on, and graduated from Whitehall High School in 1951. Her high-stepping photo and actual uniform are enshrined at the Jefferson Valley Museum in Whitehall.

Fran attended the Billings Business College and enjoyed working as a bookkeeper. Seeking adventure, she and a friend - each with $100 before they bought their train tickets - headed to Sacramento, California to live along the beach and have what she referred to as the best time" working and playing. Pat joined her in California and according to Fran's self-written life story, they, "had some good times and met a lot of guys." The two moved back to Montana in 1956, settling in Great Falls.

On a night out and about in Great Falls, Fran and Pat, along with their roommate Rose Dorman, met up with "best friends" Dick Duncan and Maurice Muzzana. After Pat and Maurice were married, Fran decided (with urging from her mother) that she should go on a date with Dick Duncan; they were married on April 20, 1958, in Whitehall.

Dick and Fran welcomed son Scott in 1959, daughter Cindy in 1960, and daughter Sandy in 1964. The family home was in Black Eagle and Fran was active in the Collins School PTA, serving as president for one year. She was secretary of the City PTA Council and organized a Block Parent Program in her neighborhood. She was also active in the Black Eagle Volunteer Firemen's Auxiliary.

Fran went to work when the kids all started school. She worked as a bookkeeper over the years for Wholesale Flooring, Contract Flooring, and Associated Business Systems. She enjoyed the work and the friendships she made during her career.

Fran joined a knitting club in 1960 that is still meeting today. She loved keeping busy with her hands and was a talented craftswoman - crocheting, sewing, ceramics, painting, and woodworking. Her beautiful and intricate needlepoint work will be cherished by the family for generations to come.

Dick and Fran built a home on Smelter Avenue and moved in in 1977. Living less than a block from the Anaconda Golf Course, they took up the sport and both enjoyed many years of golfing together and in leagues. They always played in the Earl's Bar annual tournament. The couple also enjoyed traveling, taking bus tours, and cruises with friends.

Dick passed away suddenly in 1996. In her 26 years as a widow, Fran soldiered on. She continued to take trips and moved to a condo which she helped design. She was instrumental in completing work on the book she and Dick and others had started, titled "Under the Big Stack", a pictorial and well-researched history of the Anaconda Company copper smelter and Black Eagle community.

Fran enjoyed watching her grandchildren along with Pat's grandchildren play sports and attended recitals, plays, or anything the grandkids participated in.

Fran was able to travel all over the USA with her dear friend and quasi-sister Jean Gouin. Fran and Jean along with Pat and Monte Marzetta and Ken and Nora Tietema enjoyed many trips with lots of laughs and wonderful memories.

Fran was preceded in death by her parents, her husband Dick, brother-in-law Maurice Muzzana and "adopted brother" Chuck Gouin.

A service for Fran will be held Friday, July 1st at Croxford Funeral Home at 2 PM, followed by a reception at the Black Eagle Community Center.