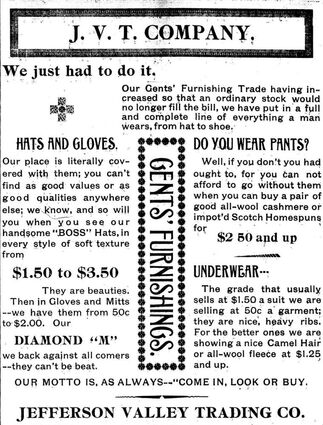 Mining was the newsmaker in the Jefferson Valley in late August 1896. Outside of our valley, there was a national debate on backing the dollar with silver; a yacht race on Lake Erie was canceled due to a lack of wind while in the Ohio Valley, the Green oil field sustained over $100,000 in damage from severe wind that knocked over oil derricks and lightning killed livestock and destroyed several barns. The following is taken as written from the August 21 and 28 editions of the Jefferson Valley Zephyr. The accompanying photo is an ad that appeared in the paper during that time.