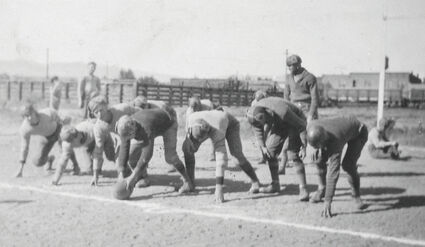 WHS football team practicing on the dirt field on the south side of the tracks near the old railroad depot.

During the second half of September in 1896, there was a dynamite plot against Queen Victoria, and a war was raging in Europe with reports of an organized massacre of civilians. Here in Montana rainfall in the state was the greatest known in the summer months, Tom McFadden, a Powder River ranchman and old Indian scout, was killed by being thrown from a vicious horse, and The Old Faithful mine near Bannock may have the richest body of ore discovered in the world-17 ounces of rock yield a quarter pound of gold. In Whitehall, things were a little calmer than in the first half of the month.