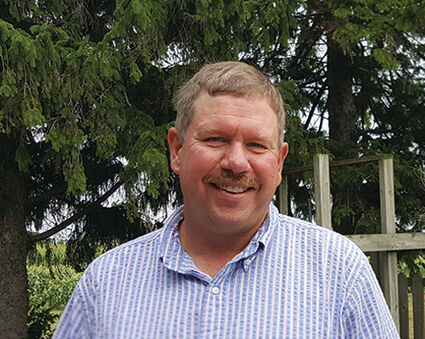 Daniel Thomas Volz passed away on October 27th, 2022 surrounded by family at the age of 54 after a courageous battle with cancer. Even in his final week of life, Dan continued to display his kind-hearted and joking nature, delighting his family with small jokes and pranks from his recliner. He will always be remembered for his kind-hearted nature; strong work ethic; love of family, cooking, eating and chatting with everyone he meets.

Dan was born in Deckerville, Michigan on April 23, 1968. He graduated from Ubly High School, being heavily involved in FFA and earning his Eagle Scout. He then received an associate's degree in dairy technology from Michigan State University. He and his dad ran the Volz family dairy farm in Minden City. In addition to caring for the cows, he also loved driving tractors and creating order in nature. He met Brenda Sacry at a church young adult camp and they were married in 1989.

In 2002, Dan and Brenda moved their family to Whitehall, Montana where Brenda grew up. He continued his vibrant life becoming deeply involved with the Whitehall community, including organizing children's soccer leagues, planting a community garden, coordinating a volleyball league, and dedicating countless hours to the Whitehall Community of Christ Church. While carpet cleaning, lawn mowing (an extension of his love of farm machines and nature), and snow shoveling, he loved to chat with everyone he encountered.

Dan is survived by his wife, Brenda Volz; his parents, Dale and Esther Volz; his children, Travis Volz and wife Amy, Darcy Robbins and husband Ke'Vionne, and Erica Ronsberg and husband Kyle; and his siblings, Sheila Robbe and Todd Volz as well as their families.