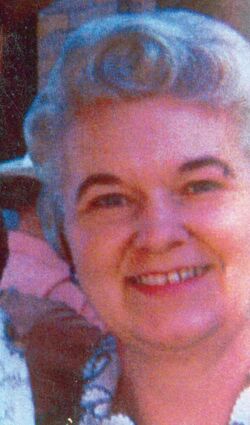 Beverly Smith passed away peacefully on November 17, 2022, at Barrett Hospital. She was born Beverly Elaine Parks on April 16, 1928, to Eldwin and Tennie Parks in Shelley, Idaho, and lived briefly in Rigby, Idaho before the family relocated to Whitehall, Montana. There she grew up the second of five children. She drove a team of horses helping her father in the hayfield amongst other chores aside from school.

During high school, she and a few friends often skipped class and took the train to Butte shopping. She and a couple of other home economics students passed donuts under the shop class door to their boyfriends. One day she mistook the professor's feet under the door for one of her friends and got caught.

In the summer she stayed in Bozeman with her Uncle Dewey and Aunt Florence Johnson and worked at Dad's Gillette Grocery Store. One day he said he wanted to show her something. It was a tarantula in a jar. He'd found it in the bananas he stored under his and his wife's bed. He told her not to tell her or she wouldn't let him store them under the bed anymore.

On another occasion, she and another friend Donna took a taxi to a Bozeman dance. When the driver told Donna the fee she said "I didn't want to buy your taxi, I just wanted a ride!" At another dance Beverly met a Marine home from the war, Richard (Bud) Smith, and they were later married in November of 1947. Daughter Tennie was born in 1948 and son Lance in 1949, followed by son Danny in 1951.

The family lived early on in Cardwell running a ranch for Frank Kuntz of Whitehall. After a few years, they bought a ranch down Middle Lane between Twin Bridges and Sheridan. Besides working the ranch, Bev and Bud worked for a while in the potato fields for Changman near Whitehall. Bev also worked for a time at the Seed House out of Sheridan.

Bev and Bud, after selling the ranch, bought the Shermont Motel in Sheridan in 1964 and ran it for 13 years before retiring. Mom then worked for a while at LaRae Myre's Jewelry Store on Main Street. She played Bingo every week with friends at the Ruby Hotel Sump and went to the Methodist Church. She also served in local elections.

Bev moved to Bicentennial Apartments in 2005, two years after Buds' death, and has lived there until very recently.

She was a vibrant, stylish, fun-loving, and kind person who will be missed by many.

There will be a service set for a later date next year.