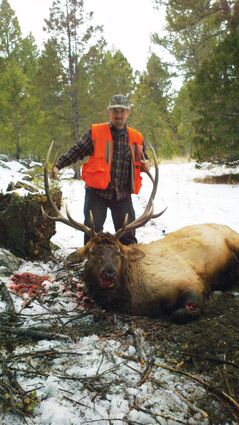 On December 7, 2022, Richard Joe Hollamon left his beloved wife and family to be with his Lord and Savior.

Richard was born on December 1st, 1942 in Drain, Oregon to Joseph and Lois (MacDonald) Hollamon. Richard was the second oldest of nine children. He attended school in Oakland, OR where he excelled in sports and academics. It was at Oakland High School where he met the love of his life, Joyce (Terry).

Richard and Joyce were married on June 8th, 1963. They then headed to Toketee, Oregon where Richard started his career with the U.S. Forest Service which became his life's calling.

It was at Toketee where the first of his children, Bradley, was born. Two years later, their daughter, Cindy, was born. They lived at Toketee for eight years. Richard transferred to Corvallis, Oregon where he continued to work for the forest service.

He then transferred to Hebo Ranger Station. Richard and his family then moved to Butte, MT where he worked for the Deer Lodge National Forest until he retired in 1998.

After retiring Richard and Joyce started construction on their dream home outside of Whitehall, MT which they finished in 1999 and has remained their home since. Richard was a true engineer in every sense of the word, designing the plans for their home, many outbuildings, and other facets of their property. He enjoyed gardening and planted an enormous garden each spring. The garden was also home to five large apple trees. It was from those apples that he perfected his apple pies, apple butter, and cider. He engineered an apple press to increase his cider production, it was one of the many things he engineered over the years as he always appreciated an engineering challenge regardless of how simple or difficult it could be.

Richard was a quiet and stoic individual, however, if you had an opportunity to be in his company when he decided to share hunting and fishing stories, his words flowed with enthusiasm and humor and kept everyone present entertained.

Richard was an avid outdoorsman and spent countless days hunting and fishing over the years.

One of his biggest joys in life was teaching his grandsons to hunt and fish and how to be a responsible outdoorsman and respect the land. Richard also enjoyed attending his grandkids' sporting events and rarely missed a wrestling meet, baseball, softball, football, or basketball game. He could recall with precision every catch, pitch, pass, basket, and move.

After the grandkids grew up, Richard continued his enthusiasm for sports with his involvement in his great-grandkids' pursuits and rarely missed a baseball game or wrestling meet. If he was unable to attend in person, he would figure out how to "live stream" the matches on his computer so he could attend from home.

Richard's legacy for a life in the outdoors and family life will be greatly missed by many, but none more than his family. He was a wonderful husband, father, grandpa, and great-grandpa.

Richard was preceded in death by his parents, Joseph and Lois, sister Sandra (Fitzgerald), and brother Ronald. Richard is survived by his wife Joyce (Terry), son Brad, daughter Cindy, grandsons Kevin (Keleigh), Ryan Bronson, and Tucker Bronson, and granddaughters Erica (Matt) and Jennica Martin. He is also survived by five sisters, a brother, and two brothers-in-law. He was also a great-grandfather to nine great-grandsons and three great-granddaughters.

He will be missed by everyone who was fortunate enough to have known him. He was one of a kind individual who believed in, above anything else, the virtues of honesty and integrity and it showed in all his life pursuits.