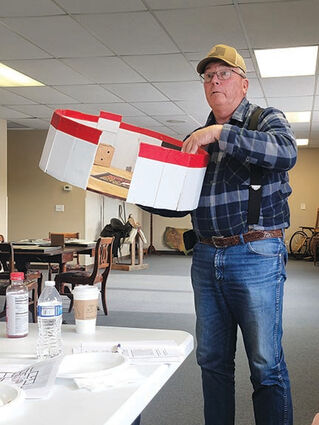 RING OF HONOR: Western Legacy Executive Director Tom Harrington presents a mock-up of the proposed Ring of Honor for the Pro Rodeo Hall of Fame to be constructed at the Center, hopefully within the coming months.

The Western Legacy Center (WLC) is off to a strong start in 2023, having closed on the Roberts Building at the end of 2022 and now preparing for demolition and creation of the museum aspect of the building, as well as the Montana Pro Rodeo Hall of Fame.

WLC Executive Director Tom Harrington gave a brief overview of the items accomplished within the last few months, including closing on the building with Jefferson Local Development Corporation (JLDC), securing overflow parking across the street from the WLC from Town Pump, creation and opening of the Montana Made Gift Shop, as well as monthly events to promote visibility and awareness of the WLC.

Harrington explained that the Montana Department of Transportation estimates 7-8 million people travel past the Whitehall exit, with 2.1 people in the vehicle.

"We have a real opportunity here to help businesses get more exposure, people will come in and we will point them to Lewis and Clark Caverns or Boulder Hot Springs," he said, noting that the gift shop gives 48 local Montana vendors exposure to tourist nearly every day of the year, which they would not have otherwise.

Harrington presented a 3D mockup of the Ring of Honor, as created by WLC board member Jay Linderman. The structure would be the main feature of the Montana Pro Rodeo Hall of Fame, built in the center of the facility, and would have interactive displays within featuring each Montana rodeo champion.

Jordan said that the Montana Pro Rodeo Hall of Fame and its members and board are "all in" and hope to feature Whitehall locals such as Shawn Davis and Benny Reynolds, while also explaining rodeo culture, the circuit system, and more.

"We've gotta make an impact with this facility," Jordan said. "We have been incredibly protective of our name and what we do, but over the years Tom and Leonard [Wortman] have demonstrated that Jefferson county and Whitehall are all in with helping us create a Hall of Fame. We want to be a part of the WLC and it is the general understanding of our Board that we do want to see this work."

Jordan continued that the Hall would throw all of their support possible behind the project, as they want it to be something that not only brings tourists into the community but helps sustain rodeo culture for the future.

Demolition of the inner walls of the WLC is slated to begin in February, with the construction of the Ring of Honor planned as one of the first major displays.

"We want to do it right and really make an impact," Jordan reiterated. The group plans to meet again with a master plan of attack in the coming weeks.

"I'm very thankful for their participating and ideas in this huge project," Polachi said. "Their support and desire to succeed is really the driving force behind it all."