Trojans Fall to Copperheads and Panthers Over Weekend 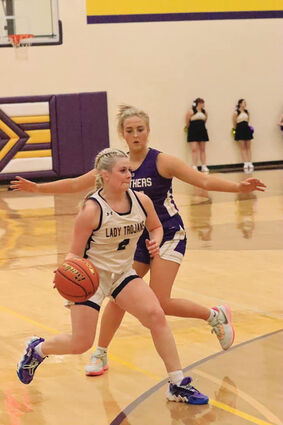 Junior Charity Nieskens fights to the hoop around a Panther.

On Thursday, January 19 the Trojans took on the Anaconda Copperheads and, unfortunately, were defeated. The men were wiped out 71 - 40; the ladies however held strong but lost 48-42.

"We were down as much as 17 in the fourth quarter and were able to fight our way back into the game. We were led by Maxine Hoagland with 14, and Hope Nieskens with 9," Coach Nieskens said.

Playing against Boulder's Jefferson High on Friday, January 20 the men had a great showing, though were still defeated 58-43.

The ladies fought but lost 64-42. Maxine Hoagland led with 13, while Lindsay Briggs and Hope Nies...