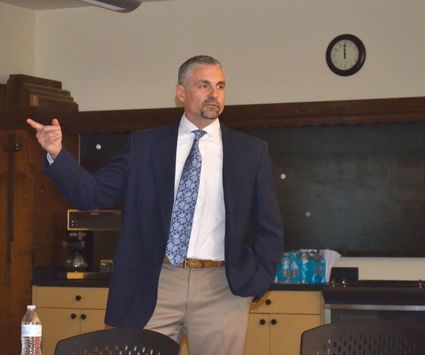 In his 18 years of practice, local attorney Edward J. Guza has always been interested in employment law.

Last week, Guza was able to share his expertise on the subject at a "Wrongful Termination and Employee Manuals Seminar" at the Borden's Building in Downtown Whitehall.

Guza spent a great deal of the presentation focusing on the Montana Wrongful Discharge Act. Guza said the MWDA was enacted in 1987 and a lot of employers do not know the act exists, and there are ways to utilize it to protect themselves.

Guza, who has offices in both Whitehall and Bozeman, said the MWDA is very unique to Montana, and the only other places where a similar version exists in United States territory are in Puerto Rico and the Virgin Islands.

Guza stressed the importance of employers recognizing what is in the act. He said the act eliminates damages for pain and suffering, emotional distress, compensatory damages, punitive damages and any other form of damages not set forth in the act.

Guza discussed personnel manuals and told those in attendance to question if they really need one. He said his office just started to use one, and it's important to include that the employer reserves the ability to revise the manual.