Leafy spurge is a perennial noxious weed that has sticky, milky white sap. The sap can cause a bad reaction if it gets in people's eyes or on their skin. Cows and much of our native wildlife will not regularly graze it, but sheep and goats can be taught to like it. Spurge has a very deep and extensive root system so pulling or burning it do not work. There are herbicides that work well if used correctly, contact your County Weed Coordinator for information, equipment, and chemicals. The Whitehall Project deals with the insects that help control it. We also are monitoring 10 research plots we set up last summer for a long-term study about the effects of the site environment in the success of the bio-control insects. This study is being done by the ARS (USDA Agricultural Research Services) out of Sidney, MT. They have given us some funding for this, and we are glad to help gather data.

Several insect species have been released on leafy spurge in Montana. The two types that we work with are: 1) the leafy spurge flea beetles (Aphthona spp., six species), and 2) the red-headed stem/root boring beetles (Oberea ethrythrocephala). We also mess a bit with the leafy spurge hawk moth Hyles euphorbiae. The moth is large and is often mistaken for a hummingbird as it hovers and feeds on flowers in the evening. The moth larvae are quite large and are black, red and white colored with a red spike sticking off the back end. Usually when insects are brightly colored it is advertising that they are toxic to predators. Hey, if you could survive eating just that icky-sticky spurge sap, you would be toxic to predators too! They will also spit an icky green fluid on you if you pick them up. As they grow, the larvae can defoliate several spurge stems. Unfortunately, though they look impressive, they emerge too late in the season to hurt the plant much.

The leafy spurge flea beetles can be almost a "silver bullet" on dry sites in Montana. They are a small beetle with jumping back legs like a grasshopper (or a flea). Yes, they hop as well as fly and crawl. These species are either brown/coppery or black in color. Large numbers of adults can really damage a spurge plant as they feed on the leaves. However, the real damage is the minute larvae which feed on the roots of spurge in the soil. We have literally seen the Tobacco Root mountains (from the lower tree line down to the Jefferson River) turn from yellow (when the spurge was blooming in summer) back to its more natural color - since the 1990's when the flea beetles were first released. 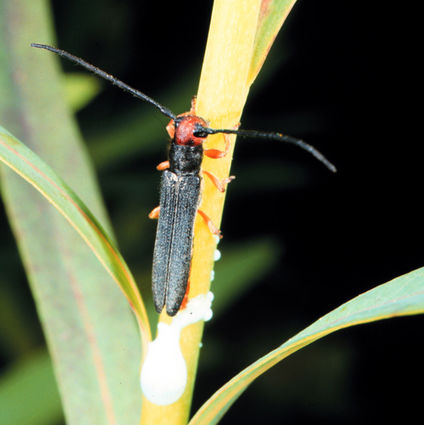 Oberea erythrocephala, adult red-headed stem and root boring beetle on leafy spurge. Note the latex (white plant sap) coming out of the damaged spurge stem. This latex is at least an irritant to humans and cattle. Photo from USDA, ARS, Sidney, MT.

The flea beetles have reduced the density of spurge that much. However, the flea beetles do not work where water saturates the soil (the larvae drown), nor do they work well in deep shade or at higher elevations. So, they do not work along ditches, canals, creeks or where heavy (flood) irrigation is practiced. We will be collecting these beetles in late June-mid July if you would like a release.

The red-headed beetle (O-bur-E-a is how we pronounce their scientific name) is a strong flier so is found throughout the area. We do not specifically collect them anymore unless requested. We do try to include some in every flea beetle release as they are out at the same time.

`Feel free to call us and reserve a release of flea beetles if you have a dry site where spurge is still flourishing. We are collecting the Dalmatian toadflax stem boring weevil this week if you need a release. Call Alycia 406-565-3995 or Todd 406-498-5236. Whack those weeds today!