This Month in Montana History: June 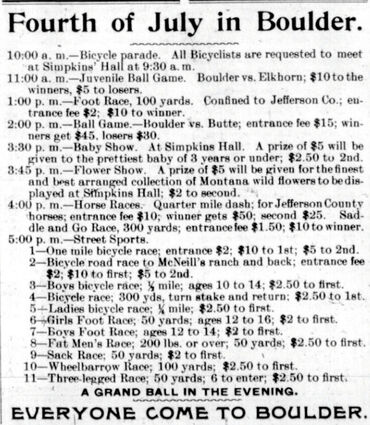 June 5, 1901 (121 years ago): The Montana School for the Deaf and Dumb in Boulder honors its first graduates, Lena Flesher and Blaine Hurst. At the time, the school was referred to as the Montana Deaf and Dumb Asylum, reflecting accurate terminology of the time, but by our standards, it is more accurate to call it by its later name of a school. Here, blind students learned various manual industries and deaf students learned lip-reading, in addition to standard academics.

June 11, 1880 (142 years ago): Jeannette Rankin is born in Missoula. She would represent Montana in the United States House of Representatives in 1916 and again in 1940. Rankin’s first term was during a time when women did not have a federal right to vote, although Montana had guaranteed the right in 1914. She remains the only woman elected to Congress from Montana.

June 14, 1893 (129 years ago): Charles Warfield is arrested for the heinous crime of stealing more than 36 pounds of butter from the Winslow Ranch in Whitehall.

June 17, 1896 (126 years ago): Someone called the “King of Necromancers” visits Corbin. His true identity, as well as how many people he raised from the dead to get that title, is unknown.

June 20, 1893 (129 years ago): A fire in breaks out in Corbin, destroying a saloon, a hotel, a store, and four houses. Fortunately, there was no loss of life reported.

June 27, 1908 (114 years ago): William Whetstone, one of the first county commissioners of Jefferson County, is murdered in Clancy when struck in the back of the head with a rock. He was 70 years old.

--Information from the Boulder Age, Age Sentinel, and Monitor, as well as additional historic sources.